Bedlam the Beast - Why You Need This Knife

The scimitar blade, which curves back to a point usually higher than some point on the spine, has been around since the 9th century, and has many different variations, such as the saber. It was mostly found on swords used by mounted soldiers. The curved blade and light weight made it great for slashing while on horseback.

This blade style is just one of the things that makes the Benchmade Bedlam so popular. This knife is a beast, and is quickly becoming a staple of the Benchmade lineup. It is sleek and aggressive and because of the textured G10 handle, feels great in the hand. The grooved handle shape gives the knife great grip and control. And as the blade type insinuates, it is a great slashing blade with a sharp point capable of piercing about anything. Take a look: 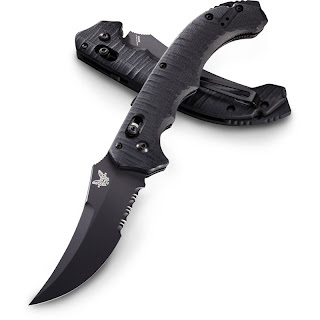 The knife is large, 9.75 inches overall, and is not recommended for those with small hands, but is a great carry knife for military, police, or anyone who wants to be able to protect themselves at the touch of a switch, an AXIS switch to be exact.

Bedlam means a state of uproar, or chaos, and with this knife that is exactly the reaction you get. You get a big, striking, well-made knife that you will want to have by your side, and with a handle like the Bedlam's, it is safe to say that the kind of chaos you get with this knife is the best kind: Controlled Choas.